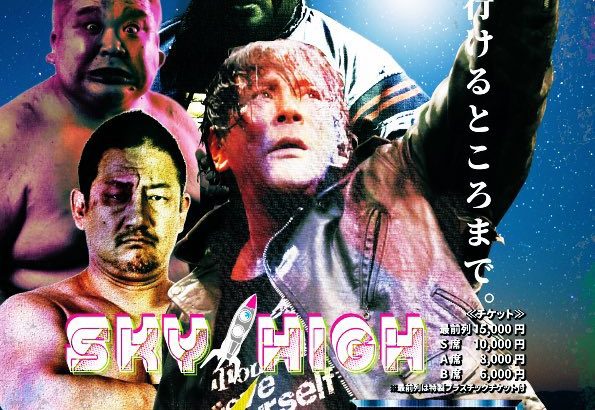 Onita decided to have all the matches of Tsurumi on October 24th (6 games are planned) in the explosion death match, and was enthusiastic that “I want to appeal the FMWE before going to the United States!” Two matches of the “Joshi explosion Princess Tournament” (Suzuki Suzu VS Madeleine, Sera Risa VS Rydeen Hagane) are also scheduled for the tournament.

Atsushi Onita and Sanshiro Takagi, are returning to the origin, will form their first tag at FMWE!

Twenty-one years ago, Onita participated in DDT’s Shibuya club ATOM tournament in Tokyo on the 13th of the same month, just before the long-awaited explosion death match with Riki Choshu (July 30, 2000, Yokohama Arena), with Takagi. Crashed in a no-rope barbed wire death match (single match). For Takagi, this was his first experience with Deathmatch. At that time, Onita withdrew from the FMW he founded, fought against the mighty enemy New Japan Pro-Wrestling alone, and succeeded in pulling out Choshu, who had retired. At that time, Onita and Takagi had an independent spirit and had a history of meeting at a small venue.

Onita, who passed through his mind at that time, said, “I was impressed with the barbed wire deathmatch at that time. Once again, we also returned to the origin and wanted to grab something for myself at that time. Would you like to go back to the times? We are waiting for you at the Tsurumi Bombing Arena on October 24th. “

Takagi said in response to this throw. “Even though I was about to fight Choshu two weeks later, I had to fight myself. The match was played on” Colosseum “(NTV) and” World Pro Wrestling “(TV Asahi), and I was a professional wrestler. It has come to be recognized by the world. There is no reason to refuse this tag request from Mr. Onita. I would like to stand next to Mr. Onita and regain the feeling of those days when I fought with Mr. Onita! Thank you for your cooperation on October 24th. “

In response to this, Onita said, “Mr. Takagi, let’s do a soul-burning death match together! Pogo, Kobayashi! Come out together. October 24, Tsurumi, Don’t run away! ”And decided the main card promptly.

On September 12, after the main (Onita VS Pogo) , Onita and Pogo shook hands and Pogo was sent off. After that, Kobayashi rushed in and attacked Onita with a barbed wire bat. Then, Pogo reappeared and fired a big fire of betrayal at Onita, suggesting that Pogo and Kobayashi could collude.

Onita and Takagi are also teaming up at the Fujitsu Stadium Kawasaki Tournament on August 21st at DDT, but Takagi’s participation in the FMW-E is the first time, and when it comes to a pure tag of only two people, what kind of chemical reaction will be shown in a rare case? ?? Attention will be focused on whether the combination of Pogo and Kobayashi will really work.

This time, the mine board current blast has not been announced.

Not all seats are easy to see the explosion on the south side. By the way, this time the number of seats is reduced from the east side on the south side, so the seat position in the center is different from the previous time. Please be careful if you want to see it in the central block.

In addition, Atsushi Onita made a disturbing remark, “Shall I fly a missile over everyone?” I still don’t know where it will come from.

How to buy ticket

sending E mail to  info@onitafire.com or sending to DM Twitter（@onitafire123）
（1）name
（2）mobile phone number
（3）kind and how many
you can order your hope, please note the side where you want to have. 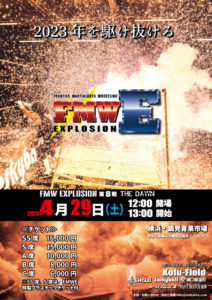